In the last of my current series of guest posts from authors with new books out, a big welcome to Drew Gummerson with his thoughts on that most crucial aspect of writing – the editing process.

Certain books, written quickly, are infamous; Jack Kerouac’s On The Road, dashed off while on the bog, written in a cramped hand along the length of a single roll of toilet paper(*), Charles Bukowski’s Post Office, 2 weeks in the making, squashed between Bukowski’s bar brawls and unsuccessful attempts at picking up Women(*), (his next book, 3 days later(*)).

(Sequestered once in hotel room Bukowski refused to appear on same bill as one and only Burroughs, William (now he was editor; cut text with scissors, scatter text across floor, shoot heroin, piece text back together. For many years Burroughs carried pages of Naked Lunch (deconstructed / constructed) gripped with single elastic-band in suitcase across Paris / Tangier / Interzone.(*))

But for most of us, as Morrissey sang, These Things Take Time.

It’s better all round if you no longer feel it’s yours. (**)

When I finished the first draft of Seven Nights at the Flamingo Hotel I put it away for six months.

It was only then I had the right perspective to be brutal, see what worked / what didn’t. So I could slash and burn. And, I honestly couldn’t remember where it was going.

And that’s where the real work started.

In this excellent New York Times article, Jenny Offill talks of how she put extracts of her new novel Weather onto poster-boards and it was only, through time, by looking at them, she could ascertain which ones sparkled, which ones weren’t merely clever.

In that first draft it’s all too easy, like Alice falling down her well, to be pleased with yourself. Time gives clear head to tidy up (delete) these sections which don’t sparkle, aren’t clever (I mean, who wrote this shit?).

On twitter Ronan Hession (writer of the wonderful Leonard and the Hungry Paul(**)) gave the Sound Advice of, when editing, to read the chapters in reverse order. This,

“1. Stops you getting distracted by the story.

2. Reveals a lot about flow… if a book reads well backwards it’s a good indication that it reads well forwards.”

Same as putting text away in drawer it is about finding a different way of looking / disrupting gaze.

And of going over and over it.

His editing process was to write reams and reams of stuff trying to find the character. It was only by writing in character’s voice that the nuggets of genius that made it into the story came out.

The rest was discarded.

But read what the man himself says, this is George freaking Saunders.

Seven Nights at the Flamingo Hotel was written on my iPhone, sitting at my kitchen table, most often before I went to work. Just an hour or two.

Having once been an obsessive writer I made a deal (with myself) a number of years ago that I would keep my evenings free for movies, music, books etc etc etc (wine).

In those few hours, like Offill I ended up with many dozens of pieces / fragments / sketches.

Drew Gummerson is the author of The Lodger and Me and Mickie James. His latest book, Seven Nights at the Flamingo Hotel, is to be published in November 2020 by Bearded Badger Publishing

As I said in my last post, I’ve been working on edits of my second novella, In the Sweep of the Bay, which will be published by Louise Walters Books in September 2020. You can read an extract of it here.

The editing process has been a very positive and fruitful one. It’s been great to work with an editor who is thoughtful and thorough, and Louise and I have sent edits back and forth several times to get to the point where we’re both happy to send the book off for copy editing. Louise has challenged me on sections where I’ve been a bit too much in love with my own writing and I’ve had to murder a few of my darlings. I’ve also had to work to make some parts clearer – a writer may see something in her/his own mind, but we have to make sure we’ve conveyed it to the reader. But on the other hand Louise has also been sympathetic to my wish to retain certain things, so long as I’ve been able to justify their inclusion. All in all, I’m sure the process has made the book a better one, and for that I’m very grateful.

And, excitingly, we’ve secured the rights to include the lyrics of a song which is very pertinent to the story.

There’s a way to go, but we’re well on the road to publication. 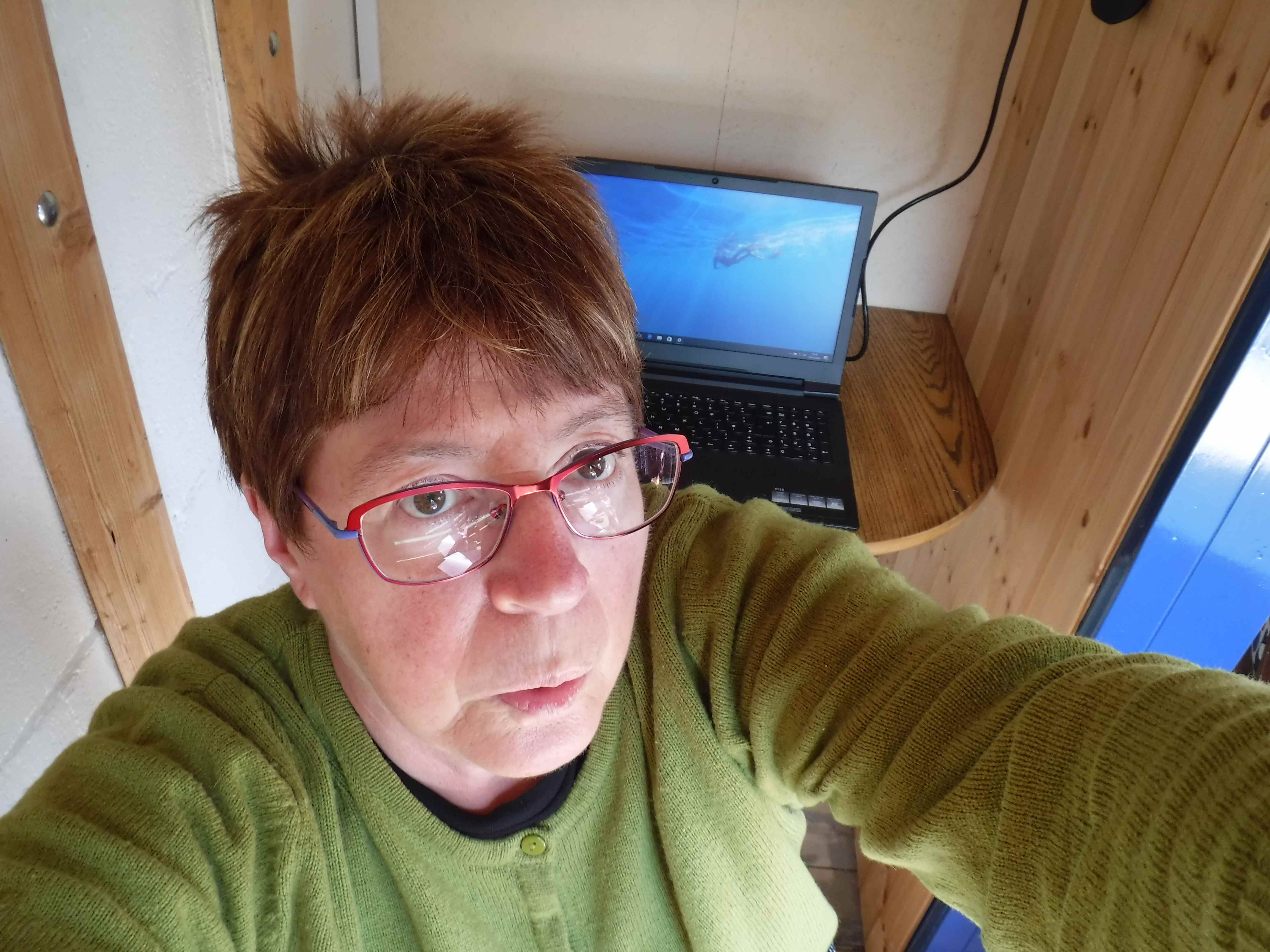 Here’s a selfie of me in my garden room, a haven for writing.

Coming soon: My thoughts about the shortlist for The Guardian’s Not the Booker prize.

“The phone ringing will wake you in the night. You’ll answer it but there’ll be no-one there. Just a cat miaouing.”  From Baby

“I blink and he’s standing there, just for a minute. Glitter lands on my shoes. I blink. He’s gone.” From Clown